Campaigners’ Surprise as Church Ripped Down

St Mary’s Church in Old Goole was shockingly pulled to the ground over the weekend to the dismay of a fundraising group that had been fighting to save it.

The land was purchased by Dave Wilcock of Wilcock’s Contractors Ltd and he plans to turn the site into a range of affordable housing.

Mr Wilcock said yesterday: “I only acquired the land at 3pm on Friday but I have been trying to buy it for three years.

I put in a demolition order three years ago, which was granted when I bought the site. I would never have bought the site if an order had been put on it to save it as a group of people in the area were trying to do, as it was in in a complete state of disrepair. The building was full of rats, it was an eyesore and people had been sleeping in it as we found mattresses in there. 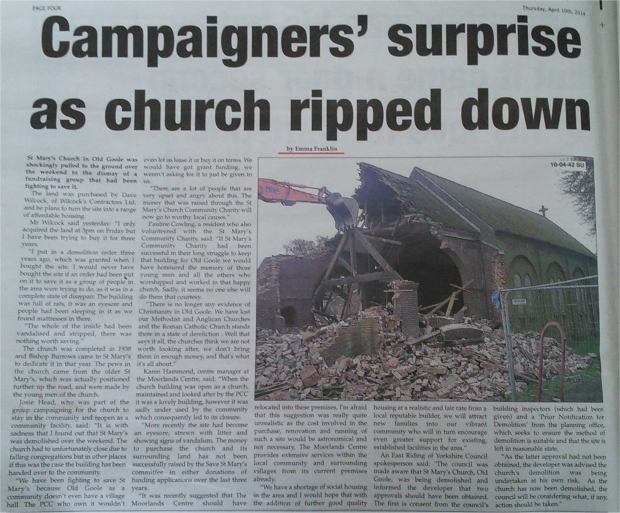 “The whole of the inside had been vandalised and stripped, there was nothing worth saving.” The church was completed in 1938 and Bishop Burrows came to St Mary’s to dedicate it in that year. The pews in the church came from the older St Mary’s, which was actually positioned further up the road and were made by the young men of the church.

Josie Head, who was campaigning for the church to stay in the community and reopen as a community facility, said: “It is with sadness that I found out that St Mary’s was demolished over the weekend. The church had to unfortunately close due to falling congregations but in other places if this was the case the building had been handed over to the community.

“We have been fighting to save St Mary’s because Old Goole as a community doesn’t even have a village hall. The PCC who own it wouldn’t even let us lease it or buy it on terms. We would have got grant funding, we weren’t asking for it to just be given to us. “There are a lot of people that are very upset and angry about this. The money that was raised through the St Mary’s Community Charity will now go to worthy local causes.”

Pauline Cowling, a resident who also volunteered with the St Mary’s Community Charity said: “If St Mary’s Community Charity had been successful in their long term struggle to keep the building for Old Goole we would have honoured the memory of those young men and all the others who worshipped and worked in that happy church. Sadly, it seems no one else will do them that courtesy.

“There is no longer any evidence of Christianity in Old Goole. We have lost our Methodist and Anglican Churches and the Roman Catholic Church stands there in a state of dereliction. Well that says it all, the churches think we are not worth looking after, we don’t bring them in enough money, and that’s what it’s all about.”

Karen Hammond, centre manager at the Morlands Centre, said, “When the church building was open as a church, maintained and looked after by the PCC it was a lovely building, however it was sadly under used by the community which consequently led to its closure. “More recently the site had become an eyesore, strewn with litter and showing signs of vandalism. The money to purchase the church and its surrounding land has not been successfully raised by the Save St Mary’s committee in either donations of funding applications over the last three years.

“It was recently suggested that the Moorlands Centre should have relocated into these premises, I,m afraid that suggestion was really quite unrealistic as the cost involved in the purchase, renovation and running of such a site would be astronomical and not necessary. The Moorlands Centre provides extensive services within the local community and surrounding villages from its current premises already.

“We have a shortage of social housing in the area and I would hope that with the addition of further good quality housing at a realistic and fair rate from a local builder reputable builder, we will attract new families into our vibrant community who will in turn encourage even greater support for existing, established facilities in the area.” An East Riding of Yorkshire Council spokesperson said: “The council was made aware that St Mary’s Church, Old Goole, was being demolished and informed the developer that two approvals should have been obtained. The first is consent from the council’s building inspectors (which had been given) and a ‘Prior Notification for Demolition’ from the planning office which seeks to ensure the method of demolition is suitable and that the site is left in reasonable state.

“As the latter approval had not been obtained, the developer was advised the church’s demolition was being undertaken at his own risk. As the church has now been demolished, the council will be considering what, if any, action should be taken.